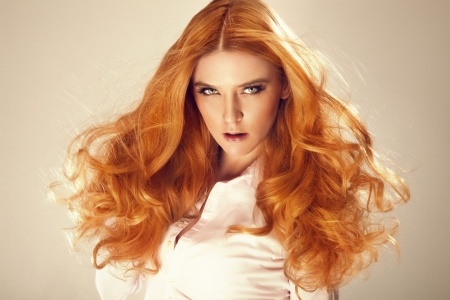 A person’s skin pigment, which determines hair color and skin tone, is influenced by the melanocortin-1 (MC1R) gene receptor. For the population’s one to two percent of redheads, a mutation in MC1R accounts for their red hair color and typical light skin.

How Common Is Melanoma?

Melanoma is the least common but the most lethal of skin cancers. Accounting for 75 percent of all skin-cancer deaths, melanoma originates in pigment-producing skin cells called melanocytes. Melanoma is believed to be a multi-step process (melanomagenesis) of genetic mutations that increase cell proliferation, cell differentiation and cell death and increase an individual’s susceptibility to ultraviolet (UV) radiation. Two types of UV radiation — UVA and UVB — can mutate DNA in skin cells and lead to melanoma.

“In this current study, we have demonstrated that the mutation MC1R-RHC promotes the PI3K/Akt signaling pathway when a red-haired individual is exposed to UV radiation,” explains co-senior author Wenyi Wei, PhD, an investigator in the Department of Pathology at BIDMC and Associate Professor of Pathology at Harvard Medical School. PI3K/Akt is a well-known cancer-causing pathway, implicated in breast cancer, ovarian cancer and lung cancer.

Our Melanoma Treatment Miami at the Miami Center for Dermatology can help patients concerned about this skin cancer. Below are more studies and findings between Melanoma and red hair.

Previous work by the study’s co-senior author Rutao Cui, MD, PhD, a member of the BUSM Department of Dermatology, had demonstrated that MC1R plays a key role in protecting melanocytes from UV-induced DNA damage. In this current study, Wei and Cui wanted to find out how this was happening.

Led by co-first authors, Lixin Wan, PhD, a member of the Wei laboratory at BIDMC and Juxiang Cao, PhD, a member of the Cui lab at BUSM, the scientific team embarked on a series of experiments in both cell cultures and mouse models. Their experiments showed that in normal circumstances, MC1R was binding to PTEN, a well-known tumor suppressor gene. PTEN acts to safeguard against cancer; without PTEN, the end result is elevated signaling in the cancer-causing P13K/Akt pathway.

The team then went on to demonstrate that MC1R-RHC mutations found in red-haired individuals lacked this protective mechanism. “As a result, upon UVB exposure, we saw an increased destruction of PTEN in the mutated pigment cells,” says Wei. The team additionally found that in these same MC1R-RHC pigment cells, elevated PI3K/Akt activity was boosting cell proliferation and was synchronizing with another well-known cancer mutation in the BRAF gene (found in nearly 70 percent of human melanomas) to further accelerate cancer development. In support of these results, note Wei and Cui, another research group at Massachusetts General Hospital recently demonstrated that expression of the BRAF gene mutation in the melanocytes of mice carrying a mutated MC1R gene led to a high incidence of invasive melanomas.

“Together, our findings provide a possible molecular mechanism as to why red-haired individuals harboring MC1R mutations are much more susceptible to UV-induced skin damage than individuals with darker skin, resulting in a 10-to100-fold higher frequency of melanoma,” says Wei.

The authors note that this newly established link between MC1R and PTEN will be a starting point for future studies, adding that it remains unclear why only MC1R genetic variants linked to the red hair phenotype — but not all MC1R variants — are unable to bind to PTEN following UV exposure.

“We think that MC1R variants, in combination with mutations in the BRAF gene, could be used as markers of an increased risk of developing melanoma,” explains Wei. The authors add that these new findings suggest that drug inhibitors that target the PI3K/Akt signaling pathway might be used in combination with Vemurafenib, a drug that targets the BRAF oncogenic protein, to treat melanoma patients who have both BRAF and MCIR variants.

This work was supported by grants from the National Institutes of Health (1RO1CA137098; UL1-TR000157; GM089763), the American Cancer Society, the Harry J. Lloyd Charitable Trust, the National Health and Medical Research Council of Australia; the National Basic Research Program of China; the Key Program of Natural Science Foundation of China; and the Program for Changjiang Scholars and Innovative Research Team in University.

Here at the Miami Center for Dermatology, your comfort and satisfaction is our main concern. For that reason, we offer Melanoma Treatment Miami. Call Today to schedule an appointment at (305) 279-7546 or Click Here to Contact Us Today!

The above story is based on materials provided by Beth Israel Deaconess Medical Center, via Newswise.

Note: Materials may be edited for content and length. For further information, please contact the source cited above.

Epilepsy Safe Mode
Dampens color and removes blinks
This mode enables people with epilepsy to use the website safely by eliminating the risk of seizures that result from flashing or blinking animations and risky color combinations.
Visually Impaired Mode
Improves website's visuals
This mode adjusts the website for the convenience of users with visual impairments such as Degrading Eyesight, Tunnel Vision, Cataract, Glaucoma, and others.
Cognitive Disability Mode
Helps to focus on specific content
This mode provides different assistive options to help users with cognitive impairments such as Dyslexia, Autism, CVA, and others, to focus on the essential elements of the website more easily.
ADHD Friendly Mode
Reduces distractions and improve focus
This mode helps users with ADHD and Neurodevelopmental disorders to read, browse, and focus on the main website elements more easily while significantly reducing distractions.
Blindness Mode
Allows using the site with your screen-reader
This mode configures the website to be compatible with screen-readers such as JAWS, NVDA, VoiceOver, and TalkBack. A screen-reader is software for blind users that is installed on a computer and smartphone, and websites must be compatible with it.

We firmly believe that the internet should be available and accessible to anyone, and are committed to providing a website that is accessible to the widest possible audience, regardless of circumstance and ability.

To fulfill this, we aim to adhere as strictly as possible to the World Wide Web Consortium’s (W3C) Web Content Accessibility Guidelines 2.1 (WCAG 2.1) at the AA level. These guidelines explain how to make web content accessible to people with a wide array of disabilities. Complying with those guidelines helps us ensure that the website is accessible to all people: blind people, people with motor impairments, visual impairment, cognitive disabilities, and more.

This website utilizes various technologies that are meant to make it as accessible as possible at all times. We utilize an accessibility interface that allows persons with specific disabilities to adjust the website’s UI (user interface) and design it to their personal needs.

Additionally, the website utilizes an AI-based application that runs in the background and optimizes its accessibility level constantly. This application remediates the website’s HTML, adapts Its functionality and behavior for screen-readers used by the blind users, and for keyboard functions used by individuals with motor impairments.

If you’ve found a malfunction or have ideas for improvement, we’ll be happy to hear from you. You can reach out to the website’s operators by using the following email

Our website implements the ARIA attributes (Accessible Rich Internet Applications) technique, alongside various different behavioral changes, to ensure blind users visiting with screen-readers are able to read, comprehend, and enjoy the website’s functions. As soon as a user with a screen-reader enters your site, they immediately receive a prompt to enter the Screen-Reader Profile so they can browse and operate your site effectively. Here’s how our website covers some of the most important screen-reader requirements, alongside console screenshots of code examples:

We aim to support the widest array of browsers and assistive technologies as possible, so our users can choose the best fitting tools for them, with as few limitations as possible. Therefore, we have worked very hard to be able to support all major systems that comprise over 95% of the user market share including Google Chrome, Mozilla Firefox, Apple Safari, Opera and Microsoft Edge, JAWS and NVDA (screen readers), both for Windows and for MAC users.

Despite our very best efforts to allow anybody to adjust the website to their needs, there may still be pages or sections that are not fully accessible, are in the process of becoming accessible, or are lacking an adequate technological solution to make them accessible. Still, we are continually improving our accessibility, adding, updating and improving its options and features, and developing and adopting new technologies. All this is meant to reach the optimal level of accessibility, following technological advancements. For any assistance, please reach out to