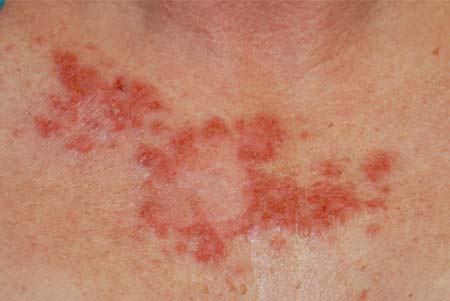 It is important you get treatment today for your Non-melanoma Skin Cancer. Miami Center for Dermatology just got the latest non-invasive radiation treatment for non-melanoma skin cancer. We have placed the article below from the American Cancer Society for you to educate yourself on how important it is to get early treatment.

A study published in the Journal of the National Cancer Institute found that people with a history of basal or squamous cell skin cancer (also known as non-melanoma skin cancer) were at an increased risk of developing other cancers later on. The research suggests genetic factors may put some people at a higher cancer risk than others.

“There appears to be a heightened overall cancer risk associated with Non-Melanoma Skin Cancer, and the evidence seems to indicate that genetic factors are involved,” said lead researcher Anthony J. Alberg, Ph.D., from the Medical University of South Carolina.

Patients with a history of basal or squamous cell skin cancer shouldn’t panic, however.

“This study indicates that a personal history of Non-Melanoma Skin Cancer may be a more important part of a person’s health history than previously thought,” said Alberg. “But the research is preliminary.”

Alberg, along with colleagues from the National Cancer Institute, Johns Hopkins University, and the Medical University of South Carolina, used data from the CLUE (Give Us a Clue to Cancer and Heart Disease) II cohort study to compare risk in 769 non-melanoma cancer survivors and 18,405 individuals who never had the disease.

What the Study Found

The researchers tracked the two groups over a period of 16 years – from May 1989 to December 2005 — and found that those patients with a history of skin cancer had about twice the risk of developing another type of cancer, even after adjusting for other risk factors, including age, sex, body mass index, education, skin type, sunburn history, and smoking history.

“We found that even after adjusting for all factors, there was a doubling of risk for subsequent cancers among Non-Melanoma Skin Cancer patients,” said Alberg.

The most frequently diagnosed cancers were also the most common in the United States: lung, colorectal, breast, and prostate cancer. Unsurprisingly, the increased risk was highest for melanoma, cancer that is also linked to sun exposure, but the increased risk for other cancers remained statistically significant even when the researchers removed melanoma from the group.

Patients who were diagnosed with Non-Melanoma Skin Cancer at an earlier age — in the 25-44 year age group – were more likely to be diagnosed with subsequent cancer later on – a pattern that researchers think points to a genetic susceptibility in some people to develop cancer.

Alberg thinks the answer to this lies in the DNA. He plans to study DNA repair mechanisms as well as inflammatory and immune responses in this population to look for possible links.

In the meantime, you can minimize your cancer risk by avoiding smoking, limiting your alcohol intake, protecting yourself from the sun, maintaining a healthy weight, getting regular exercise, and adding more fruits and veggies to your diet. To find out more about how you can reduce your risk, see Cancer Prevention and Early Detection and Nutrition and Physical Activity for Cancer Prevention.

Cancer screening tests are also important because cancers that are found early are easier to treat. People who have had any type of skin cancer should take special care to check for new skin cancers, but screening recommendations for other types of cancer are the same as those for the general population. See the American Cancer Society’s Guidelines for the Early Detection of Cancer to learn more about screening exams for different types of cancer.

Here at the Miami Center for Dermatology, your comfort and satisfaction are our main concerns. For that reason, we offer Non-Melanoma Skin Cancer Treatment. Call Today to schedule an appointment at (305) 279-7546!

Epilepsy Safe Mode
Dampens color and removes blinks
This mode enables people with epilepsy to use the website safely by eliminating the risk of seizures that result from flashing or blinking animations and risky color combinations.
Visually Impaired Mode
Improves website's visuals
This mode adjusts the website for the convenience of users with visual impairments such as Degrading Eyesight, Tunnel Vision, Cataract, Glaucoma, and others.
Cognitive Disability Mode
Helps to focus on specific content
This mode provides different assistive options to help users with cognitive impairments such as Dyslexia, Autism, CVA, and others, to focus on the essential elements of the website more easily.
ADHD Friendly Mode
Reduces distractions and improve focus
This mode helps users with ADHD and Neurodevelopmental disorders to read, browse, and focus on the main website elements more easily while significantly reducing distractions.
Blindness Mode
Allows using the site with your screen-reader
This mode configures the website to be compatible with screen-readers such as JAWS, NVDA, VoiceOver, and TalkBack. A screen-reader is software for blind users that is installed on a computer and smartphone, and websites must be compatible with it.

We firmly believe that the internet should be available and accessible to anyone, and are committed to providing a website that is accessible to the widest possible audience, regardless of circumstance and ability.

To fulfill this, we aim to adhere as strictly as possible to the World Wide Web Consortium’s (W3C) Web Content Accessibility Guidelines 2.1 (WCAG 2.1) at the AA level. These guidelines explain how to make web content accessible to people with a wide array of disabilities. Complying with those guidelines helps us ensure that the website is accessible to all people: blind people, people with motor impairments, visual impairment, cognitive disabilities, and more.

This website utilizes various technologies that are meant to make it as accessible as possible at all times. We utilize an accessibility interface that allows persons with specific disabilities to adjust the website’s UI (user interface) and design it to their personal needs.

Additionally, the website utilizes an AI-based application that runs in the background and optimizes its accessibility level constantly. This application remediates the website’s HTML, adapts Its functionality and behavior for screen-readers used by the blind users, and for keyboard functions used by individuals with motor impairments.

If you’ve found a malfunction or have ideas for improvement, we’ll be happy to hear from you. You can reach out to the website’s operators by using the following email

Our website implements the ARIA attributes (Accessible Rich Internet Applications) technique, alongside various different behavioral changes, to ensure blind users visiting with screen-readers are able to read, comprehend, and enjoy the website’s functions. As soon as a user with a screen-reader enters your site, they immediately receive a prompt to enter the Screen-Reader Profile so they can browse and operate your site effectively. Here’s how our website covers some of the most important screen-reader requirements, alongside console screenshots of code examples:

We aim to support the widest array of browsers and assistive technologies as possible, so our users can choose the best fitting tools for them, with as few limitations as possible. Therefore, we have worked very hard to be able to support all major systems that comprise over 95% of the user market share including Google Chrome, Mozilla Firefox, Apple Safari, Opera and Microsoft Edge, JAWS and NVDA (screen readers), both for Windows and for MAC users.

Despite our very best efforts to allow anybody to adjust the website to their needs, there may still be pages or sections that are not fully accessible, are in the process of becoming accessible, or are lacking an adequate technological solution to make them accessible. Still, we are continually improving our accessibility, adding, updating and improving its options and features, and developing and adopting new technologies. All this is meant to reach the optimal level of accessibility, following technological advancements. For any assistance, please reach out to